The dates for most UK prides have been revealed! Check the poster below and start planning which ones you'll be visiting! 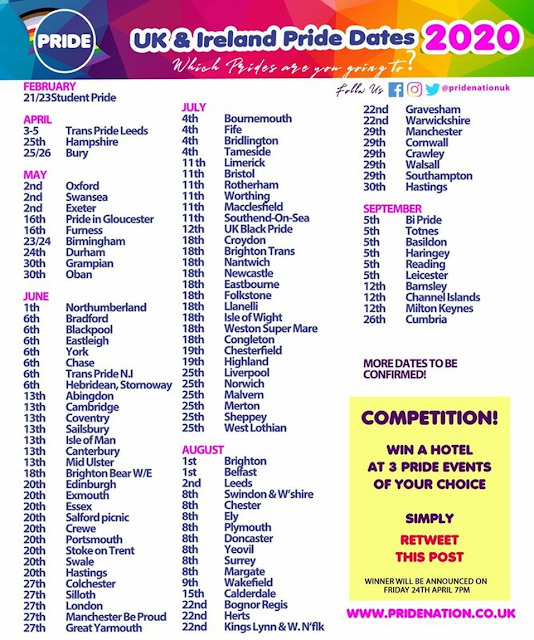 Posted by Supernovas at 03:43 No comments:

Mel is SYP’s volunteer teacher and she’s working really hard to try and get the message of LGBTQ+ inclusion out to primary and middle schools. She’s trying to spread the word and you can help by following her work on Instagram at Diversity_mel

Mel uses stories such as …and Tango Makes Three and Introducing Teddy to talk to children about diversity in families, what it means to be transgender, the importance of not feeling pressured to be a particular type of boy or girl, as well as appropriate use of language so no-one feels victimised or excluded in school. She also works with teachers to encourage them to normalise diversity and to avoid making assumptions about the children in their class.

If you are a young LGBTQ+ person and you’d like to get involved in Mel’s work, either helping with school visits or being videoed talking about your experiences, she’d love to hear from you.

Mel’s sessions are free and she can be reached at education@spaceyouthproject.co.uk. She says that personal recommendations are really great - if you know a school that would benefit from her work please tell them and tell Mel too.

Art Activist is an annual creative project that promotes the use of art and performance as a way to spread awareness for particular issues and bring along change that will benefit everyone. It acts as a bridge between LGBT History Month and IDAHOBIT Day, whilst also showcasing the talent hidden within the UK's LGBT+ community.

Art Activist hopes to encourage young people to become 'Artivists' and create media to the themes of LGBT History Month, which this year are Peace, Reconciliation and Activism. You can submit your creative piece for free here and the winning individual will be given £100 for their LGBT+ group!

The showcase event will be held on the 18th of May 2019 at the I M Marsh Campus of Liverpool John Moores University and is being hosted by GYRO.

The Proud Trust are holding their annual Being Proud Awards in celebration of IDAHOBIT day and the themes of LGBT History Month. These awards aim to celebrate the hard and mostly unrecognised work members of the LGBT+ community and allies alike have put into helping make the UK a better place for LGBT+ people.

All the individuals and groups that receive awards are initially chosen by the public, and that includes you! If you can think of anyone who deserves recognition for the hard and consistent work they put into their local LGBT+ community, follow the link here to nominate them for an award! 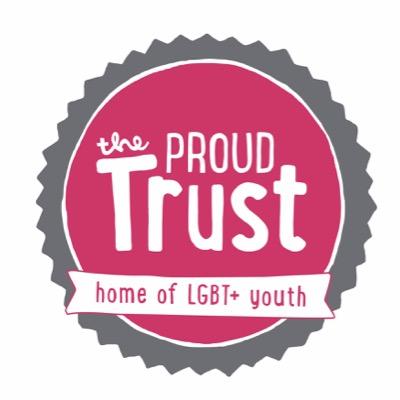 Posted by Supernovas at 06:34 No comments:

BBC Sounds have just published the first two episodes for the new podcast 'NB', which explores what it is like to be non-binary and to come out in a world where everything is either 'male' or 'female'. The podcast is presented by Caitlin Benedict, who recently came out as non-binary and talks about their struggles in the show, and Amrou Al-Kadhi, a non-binary filmmaker, writer and drag artist.

The podcast itself manages to include quite a wide range of experiences from the LBGT+ community, including people of colour, different religious backgrounds and intersex voices. Having a show that brings publicity to the lesser known parts of the LGBT+ community really helps to show the impact that support can have on you.

The show also talks about addressing trans people, including some history on the evolution of language and just how far back gender neutral pronouns go. It also addresses what it feels like for a trans person to have the correct pronouns used for them in a natural way, and how something so simple and easy as that can make a big difference.

Overall, it's great to see a podcast that talks about non-binary so openly on the BBC and although the show does feature some strong language, I would definitely recommend watching it whether you are non-binary or not. It gives a valuable insight into what it is like to be non-binary, as well as a history into how the topic gender has been treated by different cultures.
Posted by Supernovas at 00:00 No comments:

Autism Wessex have introduced a new card, called an 'Autism Alert Card', for anyone over the age of 10 who is on the autistic Spectrum, including Asperger syndrome.

This card has been developed by a board of a wide range of groups and individuals, including Autism Wessex themselves, Dorset Police, various children's services and people with autism and Asperger syndrome. The scheme hopes to provide autism awareness training to Bournemouth, Dorset and Poole police.

The card itself contains basic information on autism and Asperger's as well as emergency information and contacts about the card holder, and can be used by an individual if they need support from one of their contacts, help or consideration from emergency services, or just want to tell people more about their condition.

This card should help bring awareness and support to all ages of people with ASD and Asperger's when they most need it. You can find out more and apply for your own card here, or call directly on 01305 213135, and your first card is completely free!

Posted by Supernovas at 03:28 No comments:

Interviews Open for the SpeakOut! Project!

Following another project run early last year, it had come to the History Centre's attention that there is a huge void of LGBT+ history in Dorset, with little to none in the way of oral history.

The SpeakOut! project aims to fix this by holding recorded interviews of LGBT+ individuals across Dorset. These interviews will provide important history of the experiences of LGBT+ people, as well as the progress made as a community. The project will allow people to talk about any experiences, not just LGBT+ ones, and encourages exploring the interactions being LGBT+ has with other minorities.

Interviews can be sealed for an amount of time from 5 years to permanently for people who don't want their information being public, and consent for the storage of data can be withdrawn at any time. If you are at all interested in becoming a part of Dorset's history, you can contact the project here: lgbtspeakoutproject@gmail.com, or apply through space by emailing here: iggy@spaceyouthproject.co.uk

Posted by Supernovas at 05:30 No comments:

Welcome to our blog, here you'll find the latest news from our members about what we've been up to!